This vehicle was first shown during the Vehicles dev log, but it wasn't introduced until the Alpha 2 Test of 2016. Its tires can be blown out with three bullet shots to the rim. The Dacia ranges from different colors from blue, yellow, orange, etc.

The Romanian government of the 1960s had decided to acquire the tooling and basic design of a modern, western automobile, in order to offer their own car to the Romanian people. Terms stated that the vehicle had better not be expensive, large enough for a family, and had to be powered by an engine no larger than 1.3 litres. Offers came from Alfa Romeo, Fiat, Austin and others, but the winner was the Renault 12.[2] The decision towards the French car was probably political to a large extent but sound, nonetheless. Part of the resulting vehicles were sold to consumers in the Eastern bloc, and in export markets such as South America, Canada, China, or North Korea, but also Great Britain or the Netherlands. When automobile production started at the Mioveni factory, the Renault 12 was but a prototype, for which reason, Renault offered CKD kits and tooling for the older Renault 8 Major, as a temporary replacement, resulting in the Dacia 1100, for a few years until the much awaited Romanian people's car would arrive. Both the R12 and its licensed copy, were launched in 1969. During the first few years of production, the plant assembled CKD kits imported from France. At the time of its launch, the 1300 was a modern car offering good comfort, safety, good performance and reliability, and even more so by eastern standards of the time, set by 1960's and 70's Skodas, Ladas, Moskwich, Wartburgs and other eastern block industry creations.

The 1300 was subject to multiple facelifts in an effort to maintain consumers' interest in the model, but the basic design was kept for its entire 35-year lifespan. Although performance and fuel consumption were gradually improved, quality didn't always meet the standard once they had stopped importing CKD kits. Bodypanel corrosion became the model's number one problem. Air conditioning, airbags and anti-lock brakes, were never offered. 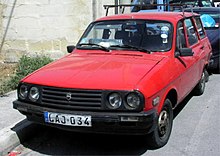 Designed in the late 1960s, the model was long in the tooth by now and its chassis was no longer able to meet safety standards of the 1980s and 90s. Therefore, Dacia started design for a replacement in the 1980s. However, financial and political setbacks only allowed the replacement to be launched in 1994, by which time it was already outdated, as the Dacia Nova. Although the newer Nova range (later evolving into Dacia SupeRNova and Dacia Solenza) sold rather well, and displayed better road manners, it never replaced the 1310 range, due to its higher price, smaller interior and other disappointing factors (Nova, SuperNova and Solenza only came in a liftback body).

Therefore Dacia was forced to facelift the 1310 model yet again, in 1998. The last 1310 model was simply named "Berlina" or "Break", for sedan or estate respectively. In an effort to keep up with modern standards, the last version was equipped with fuel injection system and a catalytic converter, meeting Euro2 emission standards.

Since 1969 when original model production started, constant change in auto models' shape and size meant that the 1310 was a compact sedan by now, even if the 1300 had started life as a medium-sized. Oddly enough, for a few months in 2004, Dacia had 3 different small sedan models simultaneously on offer.

The model scored solid sale numbers right up to its last day of production, mainly due to its low price, value for money, easy and cheap maintenance. The sedan ("Berlina") and the estate ("Break") had €4,100 and €4,250 price tags respectively, for the year 2004. The Liberta liftback had been dropped in 1996, but production of the sedan and estate was over in 2004. The "Pick-Up" range ended production in December 2006. Dacia Logan replaced the 1300/1310 model in 2004.